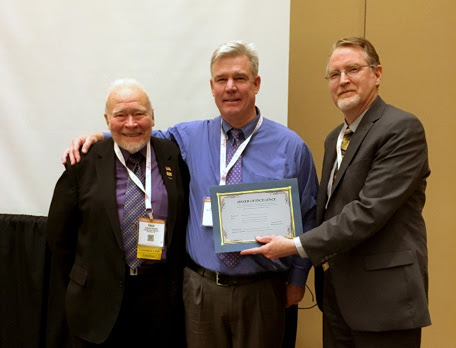 “The Impact of Geometric Factors on the Capacity of Single-Lane Roundabouts,” a paper I co-authored with Mark T. Johnson of MTJ Roundabout Engineering, recently received the Best Paper Award at 2018 TRB Annual Meeting from the TRB Roundabout Committee. The Committee annually recognizes one paper for excellence from all of the papers submitted to the Committee during each annual Call for Papers for the TRB Annual Meeting. It’s a great honor for both Mark and myself to receive the Award.

Roundabout capacity is primarily estimated by gap-acceptance or by geometric models. The 2010 Highway Capacity Manual (HCM 10) uses a gap-acceptance model developed by Siegloch (1973) with empirically derived values of critical gap and headway for single-lane and two-lane entries. A geometric capacity model was developed by Kimber and Hollis (1980) that diverged from gap-based models. The capacity of up to four lane entries was empirically derived from six geometric parameters.

In 2012 capacity data was collected as part of the FHWA project, Assessment of Roundabout Capacity Models for the Highway Capacity Manual. This data was used to produce HCM6, an update of the HCM 2010. In HCM6, a capacity curve was fitted through all the capacity data for single-lane roundabouts. The large scatter of data about the mean capacity line suggests that the single-lane roundabouts may be separated into different geometric types to improve accuracy.

The results demonstrate that differences in geometry, absent in HCM6, explain the wide data range. This was further confirmed by the geometric model that gave a good fit to both sets of data. These results indicate that the accuracy of capacity prediction is improved by including geometric variation.

Below is the podium presentation of the paper, presented by Mark, at the TRB Annual Meeting.